At the corner of Milam and Louisiana streets sits a gem of a building whose roots once ran deep throughout the city. To see it today, you’d never believe that Saenger Drug was a hugely successful and influential pharmacy—as well as home to a popular soda fountain. But did you know the fate of the Strand Theatre and maybe the entirety of the entertainment industry in northern Louisiana is also tied to this humble little drugstore?Shreveport may have never ended up quite the same without the help of two Virginia natives.

What the Public Wants

The Saenger brothers can only be described as true entrepreneurial masterminds. They first apprenticed under one of Shreveport’s pioneer druggists to learn the in’s and out’s of the commercial pharmacy trade. Within five years, Saenger Drug Company opened for business, and, with it, a new era of retail was born.

Much of the shop’s success is attributed to the brothers’ keen business savvy and strong customer relations. The pair was the first to recognize a substantial need for all-hours availability to medicines and basic necessities. In response, Saenger Drug provided 24-hour service to customers.

But the Saengers had higher aspirations than just a small-town retail store. They wanted amusement, culture and the arts. And so Saenger Amusement Company was born. 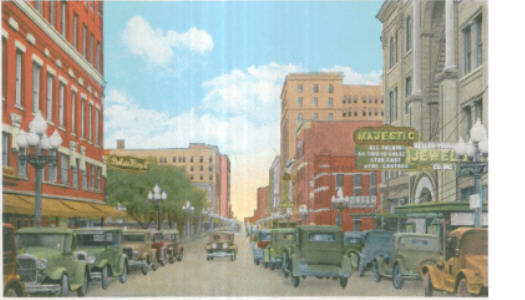 An old postcard depicts the Majestic Theatre in its heyday.

Starting with vaudeville shows, the Saengers flooded the city with as much entertainment as it could handle. Once it became clear that motion pictures were poised to take over the industry, the company dropped vaudeville altogether, choosing instead to focus on building a chain of theaters that would eventually extend through the southern states and into Cuba.

After extensive contact with the Ehrlich brothers, the owners of the Majestic Theatre on Milam Street, the group formed a partnership under Saenger-Ehrlich Enterprises. They set out on a joint venture to open the Saenger Theatre, which would later be known as the Capri.

In October 1923, groundbreaking began on the Strand Theatre, the flagship of what was to become a chain of 320 theaters. It was fully air conditioned and staffed with a full-time orchestra. After 19 months of construction, the Strand’s curtains rose for the first time to a production of The Chocolate Soldier. Shortly after, the group moved its headquarters to New Orleans and were approached by Paramount. The Saenger Brothers sold their vast holdings for roughly $10 million, about $129m in today’s dollars.

The transaction didn’t mark the end of the movie business for the Saengers. Until his death in 1932, Julian Saenger remained a prominent figure in the entertainment industry, advising on councils and socializing with producers in Hollywood and New York.
Saenger Drug shuttered its doors in the early 1990s but its legacy lives on. This once vibrant and bustling drugstore lies in wait for its next exciting adventure. And who knows? Maybe the next owners will kick off a new era of culture for the city.

Learn more about the Saengers and the drugstore that started it at History on Tap, March 24.